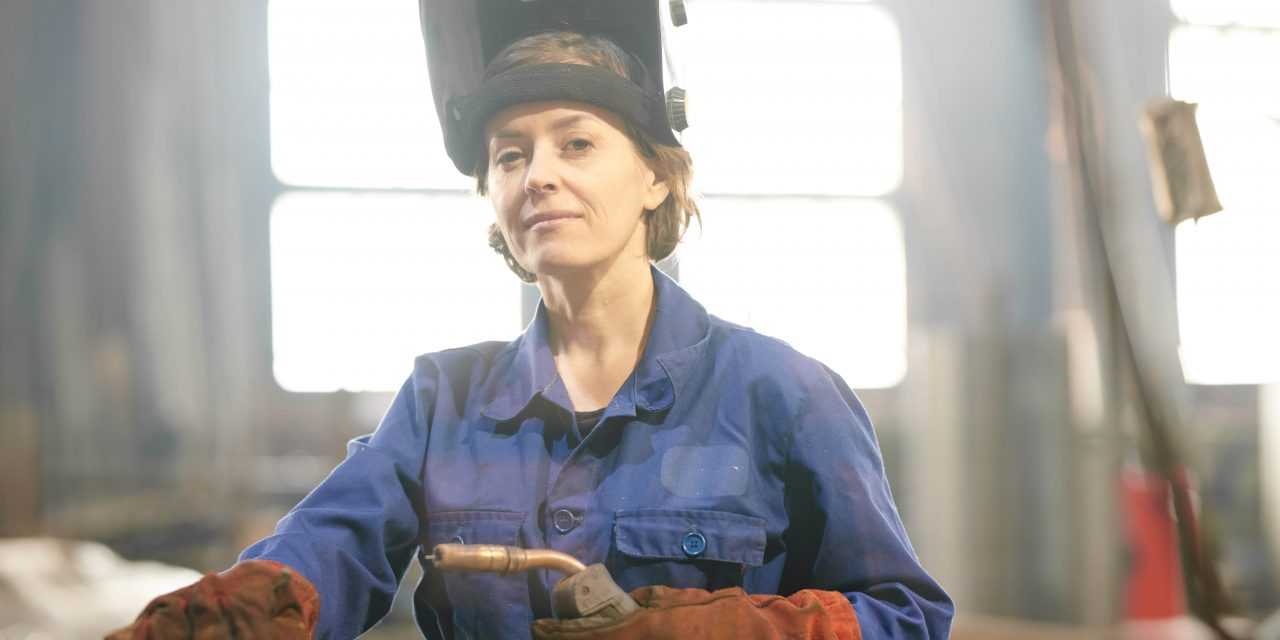 When Chantel Stuppnig started the This Girl Can initiative about four years ago, she wanted to create awareness of manufacturing careers to build a diverse workforce at Samuel Pressure Vessel Group in Marinette, Wis. The company manufacturers pressure vessels for a wide range of uses, from the COVID-19 vaccine to the puff of air that makes the fountains rise at the Bellagio Hotel & Casino in Las Vegas. The company is part of Samuel, Son & Co.

As the division’s new human resources generalist, Stuppnig was on a tour of the factory floor and noticed most of the welders were white males. “And being in northern Wisconsin, that is what you are going to get — we don’t have a real diverse slate of individuals,” says Stuppnig, who is now the manager of human resources.

With demographics like these, Stuppnig turned to her own experiences. “Going through school, the counselors targeted males to take shop classes,” she says. “I wish that I could have taken a trades class just to learn and understand. Girls can do anything. It is just a mindset at the end of the day.”

“But for women, many were leaving or not coming because they didn’t see the role models — the network,” says Carolyn Lee, the executive director of the Manufacturing Institute, part of the National Association of Manufacturers. “The lack of the network and the lack of other women — the trailblazers to follow and that support system — was detrimental,” she says.

In 2011, the Manufacturing Institute partnered with Deloitte to study and ascertain why there was such a large gender gap in the manufacturing industry. The institute’s aim was to create a network of women involved in manufacturing, one where they could learn from each other as well as raise awareness of the opportunities. The STEP (Science, Technology, Engineering and Production) Women’s Initiative, now in its ninth year, was created to elevate women’s accomplishments in the manufacturing sector. Each year, awards are given to 100 honorees and 30 emerging leaders. Women gather for two days of professional development and leadership training to build a common community. (2020’s winners were recognized via a virtual event.)

The STEP awards celebrate women engaged in their careers, from the C-suite to the factory floor, recognizing what they have done both in their jobs and in their communities. The women share their stories, tools and training to pay it forward and engage the next generation.

“The women are going back [to their communities] and helping feed the cycle and reaching out to other women to bring them into the sector,” Lee says.

By sharing their successes, these women become role models for younger women still in school.

“The idea of [having] the careers become more prevalent because they have these women as an example,” Lee says.

The This Girl Can initiative in Marinette introduces middle school girls to careers in welding, with female welders, as well as males, sharing their experiences in the industry. Stuppnig began meeting with key groups to ensure the initiative would gain traction and support. In addition to meeting with her shop’s operations manager, she met with officials from Marinette Middle School and Northeast Wisconsin Technical College (NWTC).

Through discussions with her team, Stuppnig had a full grasp on the logistics involved to make the event happen, including the involvement of the students’ parents. This Girl Can is held in October to coincide with national MFG Day activities. Sixth and seventh grade girls and their parents are invited into the Samuel facility on a weekday evening to take a tour and share a meal with the welders. (The initiative wasn’t held in 2020 due to COVID-19 restrictions.)

The company encourages the students to bring an adult female with them to the events to encourage each other. “Many of the adult women want to learn how to weld as well and work with their student,” Stuppnig says. “It is phenomenal to see.”

The second part of the event takes place on a Saturday at NWTC for welding instruction. Samuel’s welders take part in the event, including one of the company’s female welders. “We have a talented female welder, but under her hood, she looks like a typical male,” Stuppnig says. “But when she takes off the hood and you see her long hair and that she is female, eyes start popping and jaws start dropping.”

“They [middle school girls] always have questions, and I love telling them my story and how I just fell into welding, and that I still get to be a girl outside of manufacturing, but I can still do the hard work,” says Megan Brown, welder level 4, Samuel Pressure Vessel Group. “I get to play a part in helping the next generation realize that they can come into manufacturing.”

Brown shares lessons and opportunities about her manufacturing career, such as tapping into her problem-solving skills; the fact that the technical training takes about a year to complete; and that welding jobs will always be available. The skill is portable and travels with the women wherever life takes them.

By sharing their stories, women in manufacturing open the door to the possibilities. Several common themes emerge through mentoring and sharing their experiences with school-aged girls and adult women. One centers on today’s manufacturing floor and how the job and required skills are vastly different than in the past. Today, the jobs are not necessarily physical but, instead, involve critical thinking, problem solving and teamwork

“And when we tell that story and women have a dawning of the experience or they take a tour of a factory for the first time and they see the opportunity to be in that environment, it is a light turning on,” Lee says.

Perceptions change because other women see someone they identify with. “We know this is a big factor and that is why we have the pay it forward commitment out of STEP,” Lee says. “Women can go back and reach out further.”

Just where should manufacturing companies start when it comes to developing programs to attract students and women to the sector?

Stuppnig advises to just dive in. “The first time we rolled out This Girl Can, it was not perfect,” she says. “We didn’t know what we were doing, but I think it is successful, and I want to roll it out not only in Marinette schools but also the surrounding schools. I want to grow it as much as we can. There are time constraints, but I want our girls to be afforded any opportunity they can.”

She shares a success story where in the first year of the initiative, a young woman who took part in the event learning welding basics was a troubled student and not doing well in her classes. This student is now in high school taking all the trade courses she can and wants to enter a career in welding.

“If we can save one student with our help and we can lead them down a path they might not have ventured down, it shows we are doing something right,” Stuppnig says.

Lee says getting started can be something as simple as opening the doors and inviting girls and women in to show them the manufacturing environment and/or have them participate in an activity. At Samuel Pressure Vessel Group, students welded a petal on a large flower ornament and painted it in the middle school’s colors, which now hangs at the school.

And don’t forget about the resources from those that have been there. The Manufacturing Institute and NAM also have an extensive library of resource guides, best practices and case studies. Here, manufacturers can learn from each other on what works and what doesn’t, as well as materials about engaging with students locally, for example, with MFG Day efforts. STEP also has online forums.

“We have found through years of research that the most persuasive ambassadors are former students or people who can be related to,” Lee says. “Sending in the CEO is not always the person a high school student can relate to. Sending in someone in their 20s who maybe attended a local high school or college can open doors. If you are in an area where it is predominately one ethnicity or predominately one background or set of experiences, having that connection is important so students can say: ‘this is someone I gravitate to and I hear. I understand what they are saying, and they understand me.’”

One thing to keep in mind with these programs is that they can attract pushback, particularly from male employees. Stuppnig points out that in the manufacturing industry, males are recruited for these jobs every single day; women are typically not targeted, and “we do not see them in the industry.”

Thanks to efforts by Stuppnig, mentors like Brown, and the Manufacturing Institute’s STEP Women’s Initiative, perceptions are changing when it comes to encouraging women to pursue careers in manufacturing.

For more details on women involved in manufacturing, visit: Rachel Duran is a writer based in Lawrence, Kan. She has written extensively about manufacturing, workforce and economic development for several years.